I say this every time, but, the most recent Soup was the Best Soup. We’ve not had a bad event yet (is there such a thing, in the Soup world?) but Sunday’s Afro-Punk extravaganza – ESCAPOLOGY! CLOSE UP MAGIC! JUGGLING! PUNK! FACE-PAINTING! DELICIOUS SOUPS! BRILLIANT GRASS-ROOTS IDEAS! COLOURING IN! WAYNE’S APPALLINGLY BAD JOKES! – at awesome alternative school Epic Quest, is going to take some beating. 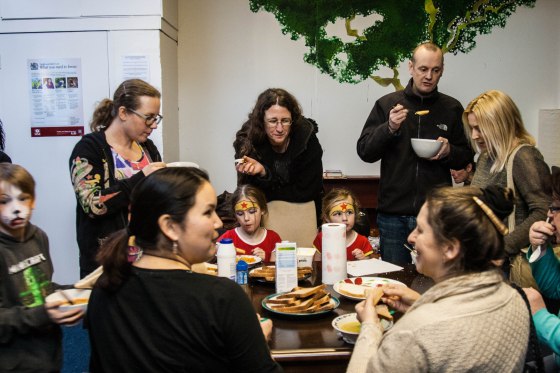 The winners of January’s soup – CAST (Communities and Sanctuary Seekers Together) – have been busy. They held their soup-funded community event on 28th February;

‘About 40 of us enjoyed Fab Feb Fun day at St. Mark’s church. Big thanks to Assayigah for his drumming workshops, which were brill. St. Marks was really supportive and had put up lots of posters so the regular CAST community were joined by several local families who we hope to keep involved.’

They’ve also had their Victoria Bear exhibition at Shared Space – highlighting the stories of refugees. And yet, Rosie, Vali and Mara still found time to cook up three African themed soups; Congolese bean, tomato and pasta soup, Congolese cabbage and bean soup, and Moroccan sweet potato, carrot and chickpea soup. (Recipes to come!) After my faux pas at January’s soup, this time I made sure the band ate first. As it happily transpired, there was plenty for seconds.

Thank you to CAST and to all the super Soupers who donated food and drink to the feast.

People are always welcome to bring wares to share or sell and we were happy to once again host Sara’s Chocolate Shop. (Vegan raw chocs also available to order on-line.) Previous presenter Maria bought friends from the local Anglo-Hispanic circle. Learning languages nourishes the brain (brain soup?) as well as being a fun way to connect diverse people. Maria invited people to learn a jot of Spanish via her lucky dip game.

Everyone knows the soup deal by now: mingle, make friends, find out what’s going on in the community whilst I faff about and forget everyone’s names. (The Essex Feminist Collective made my life a tad easier by only bringing people named Helen. Except for Jim, who wasn’t. )

As ever, the presenters made life difficult for the voters. Helen explained the benefits of a local feminist society – providing a safe space for women and promoting equality for all, Hannah (our first younger person to present, at 8 years’ old) spoke articulately about her desire to run an empowerment event for children – helping them to discover their uniqueness, and Lara gave an emotional appeal on behalf of Mums that use the local foodbank; wanting to provide them with Mother’s Day gifts. 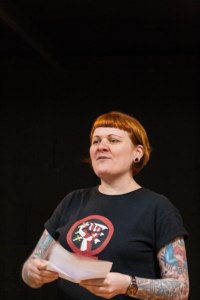 Soup is about more than the money. It’s about raising awareness of schemes, ideas and organisations – to encourage people to support, get involved, or be inspired to do their own thing. Soup hopes to galvanise grass-roots action. The winning idea gets a small amount of funding that will help get their idea off the ground. However, it’s a small enough pot of money that they’ll need to continue to work with others and be imaginative.

Everyone can do something. There’s always something within your gift. Soup might just provide the spark to set you running.

Our winner was Hannah, who took away £154.20 and is now planning her event. We will keep you posted with how she gets on, and look forward to get an update from the young woman herself at a future Soup.

Fittingly, our afternoon was rounded off with music and dancing. Russ C Rhymewave and Kaya Decadence provided punk stylings (with Kay giving a brief history of the contribution punk made to impoverished communities during the 70s and 80s – when she first entered the ‘punk phase’ that she’s yet to grow out of) interspersed with acoustic songs from Wayne – one half of Soup’s house band Warty Hubbard & His Magic Cupboard. (The half that tells the bloomin awful jokes. But we love him anyway.)

The second half of Warty – permaculture author Graham Burnett- is running a permaculture introduction day at Epic Quest on 14 March. Don’t worry if you miss it, he offers a selection of training and of course there’s his latest book (plug plug.)  Graham’s also giving a talk about permaculture and politics on 18 March.

We hear much enthusiastic feedback from people who’ve been to a soup. If you’d like to share your story – perhaps about who you met, how you were inspired, or just your thoughts about your afternoon with the Soupers – you can now do so on here.

The next soup is a work in progress. As World Book Night is 23 April, a literary theme has been suggested. Watch this space. (Feel free to comment with your own ideas!)