The one with the Swishing & the Jack Monroe bread

Yet again: Best. Soup. Over.

No, really. It really was.

Well ok, the Punks will ever take some topping, but this has got to be our best attended soup yet (numbers to be confirmed) and certainly the highest amount donated so far: £317.

We had three other Soups represented: Rowan, who helped found Reading Soup (and is already having an influence by virtue of being about 3000 times more organised than me) three visitors from a Surrey soup (coming soon – delighted they came so far to visit us!) and our very dear friends Karen and Mike (and Karen’s Mum) from Colchester Soup.

Loads of people bought stuff to Swish. (Thank you Bernie for taking charge!) I hope those who took part went away happy with new items. We had some bits left over. With the permission of those who donated (we checked this out during the event) we’re going to sell them to raise funds for Soup itself and local charities.

Emily – one our presenters – bought beautiful pottery items and necklaces to sell, Sara sold almost all her vegan chocolates, Dan (also speaking, but in his own right) represented SAVS – giving advice about the support available from the organisation – and Mick Davey from Essex Savers spoke with people about the benefits of saving with a Credit Union. 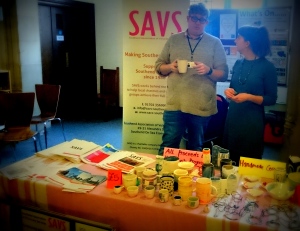 Entertainment was provided by Graham – one half of Warty Hubbard and His Magic Cupboard (we hope you feel better soon Wayne!) – and our Magician in Residence: Jobe, who kept the young people (beautifully face-painted by Helen from Essex Feminist Collective) enthralled. 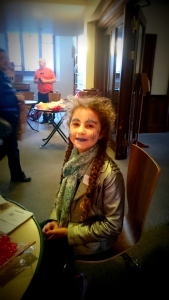 Helen and Ruby did an amazing job in the kitchen, cooking a delicious soup from the vegetables kindly donated by Soupers. They supplemented the batch of soup kindly made up in advance by one our usual chefs Pete. (We missed chef Fiona – currently in Scotland.)

AND of course there were the array of artisan loaves cooked up freshly this very morning by local chef, food blogger, champion of the people and all round Good Egg Jack Monroe. (People were disappointed you couldn’t make it in person Jack – I feel a book signing a coming-on for the next one. Maybe?)

Talking of writers, soup has another renowned author amongst our numbers – the aforementioned ‘warty’ Graham: also a permaculure teacher – see the Vegan Guide to Permaculture. His books are usually for sale at Soup.

It was wonderful to see many new faces mingling with our longer-term supporters. This is what we want; for the Soup Community to grow. For people to come along and feel welcome.

We had some news items about forthcoming events and local projects to get involved with. I’ll write a separate post about these (I’m collecting info from people!)

As ever, all of the pitches were worthy:

Dan talked about setting up a peer support group for young people identifying as LGBTQ – to help with their questions and the difficulties they might face in ‘coming out’.

Katharine talked about building on her work with libraries, and introducing children to reading, by setting up sensory storytelling sessions to encourage children with autism or learning difficulties to enjoy books.

Darren and Paul talked about the Kaos Youth Club in Rochford and how crucial it is in providing meaningful occupation for young people (including those who’ve been involved in anti-social behaviour.) They wanted funding for a table tennis table and to generally help the club to keep its doors open.

Emily had carefully prepared her pitch and told us about her pending visit to Malawi with the charity Progressio, and why this work is important in one of the world’s poorest countries.

Darren and Paul were today’s winners. They’ve promised to keep us posted about the table, and the club.

Thank you to everyone that came along, because everyone makes Soup happen. Everyone plays a part.

Revd Melanie and Crowstone URC for putting up with us and being so supportive and helpful throughout.

Helen Kelly & Ruby for spending all afternoon cooking in the kitchen.

Jack Monroe for spending all morning covered in flour.

Pete Harmsworth for taking time to prepare a batch of tasty soup in advance.

Rowan and Sharna for meeting and greeting everyone, getting contact details and otherwise helping things to run smoothly (for a given value of ‘smoothly’ of course.)

Graham for singing and Jobe for magicking.

Theresa and Sandra for helping where needed.

All the young Soupers who helped with counting votes.

Mark, Anna and Paul for taking photos. (Mark’s also working on the story of Southend Soup.)

Colchester Soup for bringing raffle prizes, which we didn’t get around to using, but which we agreed would go to Emily to help her raise funds for her work in Malawi.

Everyone that bought veggies for the soup.

Everyone else, for being awesome.